I hope you all had a Merry Christmas/Happy Hanukkah. I wanted to thank a couple of fellow bloggers who sent me packages recently. The first came from MattR who writes a couple of blogs I read regularly. The second came from gcrl. Below is sampling of what I received. 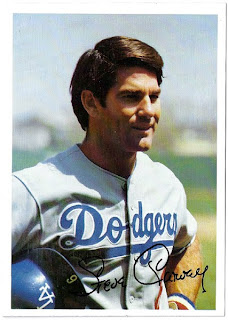 MattR sent two of these to me as well as a bunch of Dodgers from this set. I purchased a few packs of these as a kid but I never was able to pull Garvey from a pack. I do remember pulling a Rick Burleson (for what it's worth). 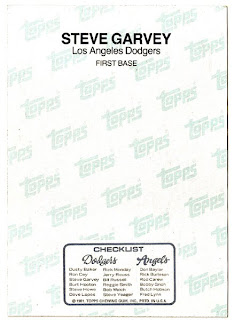 It's interesting how Topps had 12 Dodgers and only 6 Angels in the Los Angeles version of this set. They did the same thing with the New York release by favoring the Yankees. 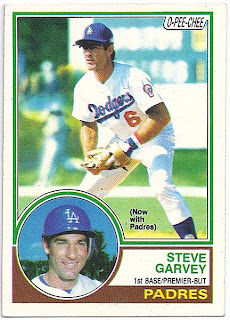 This card and all the ones below came from gcrl. The brown on the bottom of the card clashes with the rest of the card. 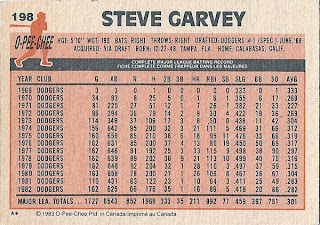 I remember as a kid how sad I was that the Dodgers didn't want to pay a few extra dollars to resign Steve. Part of the reason was that the Dodgers farm system was churning out Rookies of the Year from 1979 to 1982 and they had another candidate in Greg Brock ready to step in.


Unfortunately, Dodgers GM Al Campanis was overly influenced by Brock's inflated Albuquerque Dukes stats. I'd note that Al also lived by the saying that it's better to release a player a year too soon that a year too late. 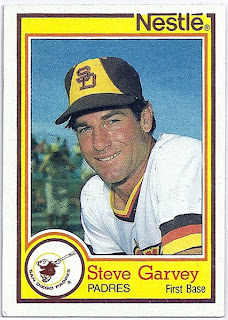 This is a new card to add to my collection. 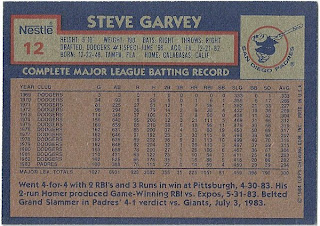 The Nestle set has the same back as 1984 Topps. 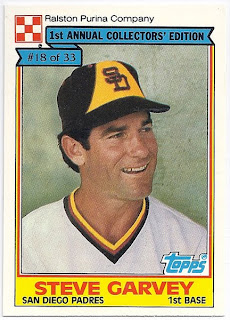 Interesting aspect of this set is that Topps' released a Cereal Set that had the exact same design as this Ralston Purina set. 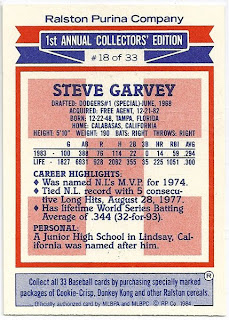 The fact that a Junior High School in Lindsay, CA was named after him was mentioned a lot during his career. I figure one of these days someone famous will have passed through the school. It's also interesting to note that the school never changed it's name (from what I can tell). 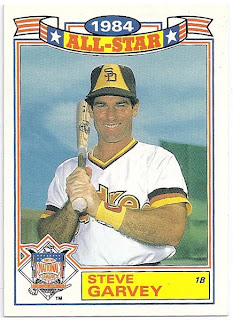 I remember these came with 1985 Topps Rack Packs. 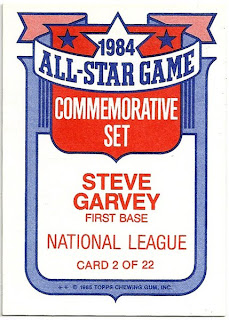 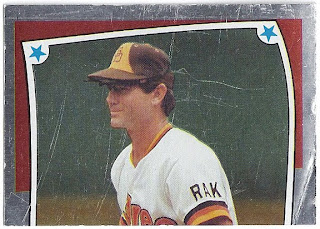 This sticker and the one below fill out my want list for Steve Garvey Topps Stickers. Topps went overboard with Steve in their 1985 set. He's got six stickers total. 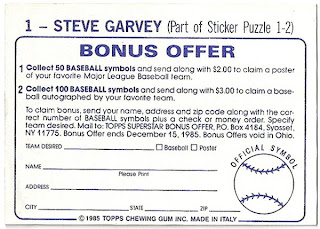 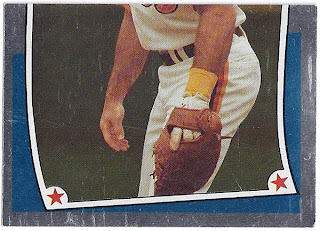 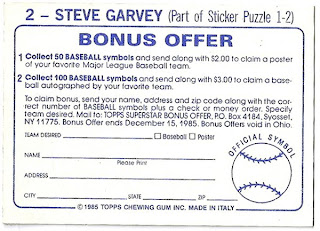 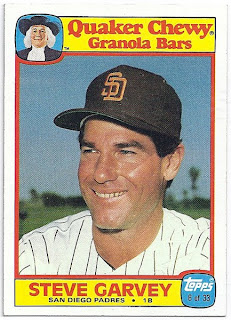 As a kid I wasn't a big fan of Granola Bars. I remember seeing these cards being advertised on Quaker boxes and almost being tempted to buy the product. 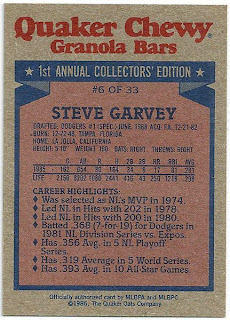 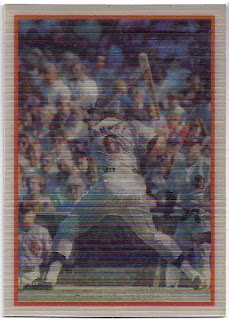 Good old Sportflics. After the novelty of seeing the cards move, I think I ended up not liking them because they're so hard to identify in plastic pages. 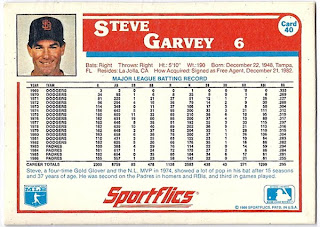 I believe this is the first time a card company used a color photo on the back of a trading card. 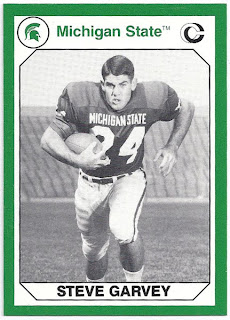 Steve as a Football Player! 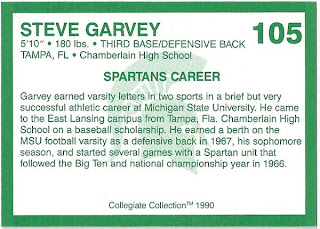 
Though not mentioned on this card, another event in Steve's life that is covered a lot on his trading cards is that he played in the "Game of the Century". 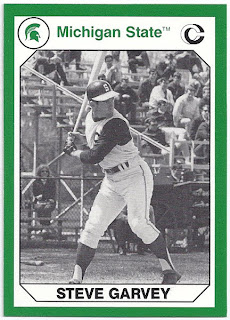 The Collegiate Collection produced Trading Cards for numerous schools in the early 1990's. 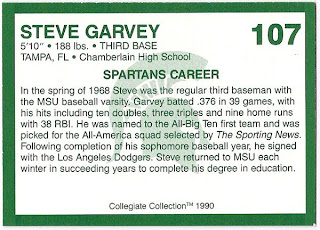 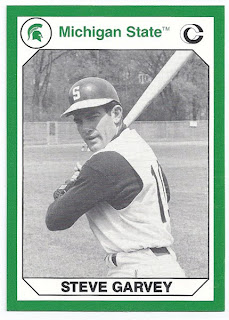 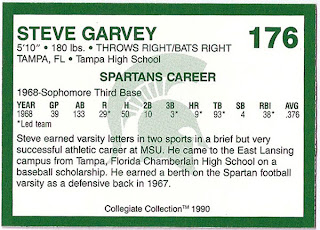 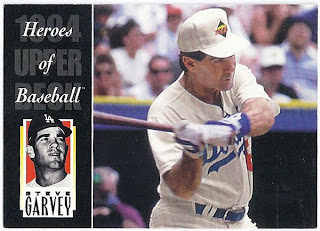 Upper Deck must have been making a lot of money to sponser the Heroes of Baseball games that were played in the early 1990's. Steve doesn't look right with the Upper Deck cap on his head.

Other than the feel good emotions of seeing old-timers back on the field again, the only thing I remember from an old-timers game played was seeing highlights of a 70-something Luke Appling hitting a home run off Warren Spahn in 1982. 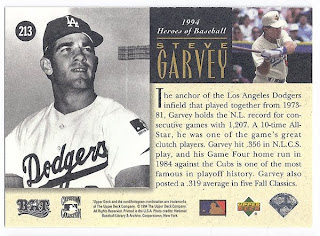 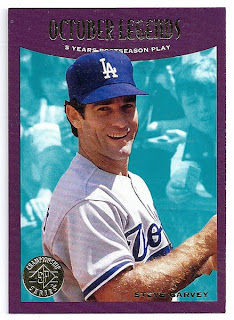 Here's Steve signing autographs which is something he's always been good at. 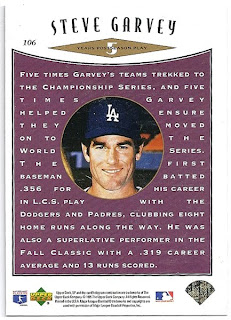 I believe SP Championship was originally only offered to retail stores in 1995. 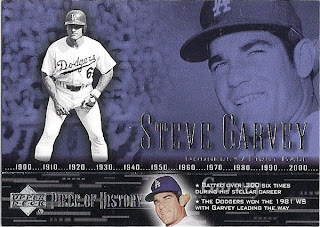 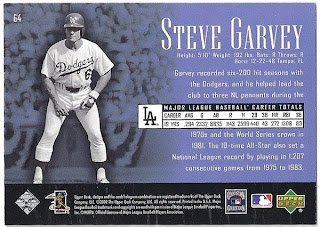