As I've mentioned in previous posts, 1975 was the first year I started collecting baseball cards. Since it's release it's become a classic with collectors and bloggers. In my opinion, it stacks up nicely with Topps' Classic sets from the 1950's. For many reasons, I've always been very fond of that set.
They include:


During the 1980's, it seemed as the dual fascination with the Rookie Cards in the set as well as the Minis continually pushed the price of the set up in value. There was even a period of time where the value of the minis was more than 2-3 times the regular sized cards due to perceived scarcity.


On the tenth anniversary on the 1975 set, Topps came out with arguably their best set of the 1980's from a popularity and collecting standpoint. 1985 Topps was highlighted by Rookie Cards of Mark McGwire, Roger Clemens, Dwight Gooden, Orel Hershiser, Eric Davis and Bret Saberhagen. Topps also release an identical all glossy parallel set called Topps Tiffany (for the second year in a row) that was the same size as the regular set and limited to 5,000 sets. At time of release, the Tiffany Set was only moderately popular with collectors because in my opinion they weren't available in pack form and they weren't what collectors were interested in at the time (That would be Minis).

Eventually someone in Topps' Product Development division (Fleer too) took a look at the hobby and realized that 1975 Topps and especially their Minis were all the rage. In an attempt to capitalize on this, Topps released a much smaller Mini set in 1986 that was a flop along the lines of a Ford Edsel.

The main reasons it failed was: 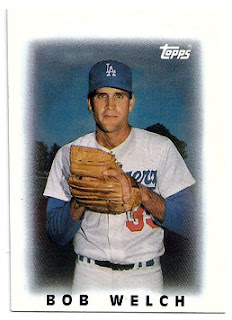 If you collected in the mid-1980's, Topps coming out with this style of Mini set made all the sense in the world. Donruss and Fleer were regularly beating them to the punch by including better Rookie Cards in their base sets and their products were performing better in the secondary market. Sadly, they could have done better and in fact they almost did.

While doing the research for the 1986 Topps Minis set, someone at Topps considered making a 1985 Topps Mini set in the same fashion as the 1975 Topps Mini set. This led to 132 cards which constituted one 11x12 sheet being produced as a test. The cards were printed in Ireland (like Topps Traded sets of the 1980s) and only 100 of each set was produced.

I don't know how these were distributed or even if they were but for whatever reason Topps missed the boat on this opportunity because a 1985 Topps Minis in pack form would have been huge considering how many Rookie Cards were in the set.

The later incarnation of the minis don't even compare to the '75 minis.

I wasn't even aware of the '86 minis until decades later, because my collecting fell off in the mid-80s (college years).

I still haven't figured out why if the '75 minis were issued as a test set in Michigan and California why I was able to buy them in upstate New York that year.