From Collector to Investor (or so I thought)

I've mentioned in previous posts that I started collecting baseball cards in 1975. Like a lot of collectors that started in the 1970's/80's, I made the natural progression through the years from casual collector to trading card investor (or so I thought). Looking back, I'd say the progression started in 1979 because I discovered three things that's I've listed below.

The first thing I discovered about baseball cards is that they could be valuable. One of the gifts I received for my tenth birthday in 1979 was the first annual Beckett Baseball Price Guide. It showed me that there were people that purchased cards individually and not just by the pack. This to me was amazing because up until now I only viewed them as a way to connect with the players and as a source of entertainment because of my experiences putting them in bicycle spokes as well as flipping them against the wall. The highlight of the book was the color pictures of very rare baseball cards (i.e. T206 Wagner, 1933 Goudey Lajoie...etc) from famed collector Barry Halper.

As I'm sure many of you know, the first Beckett price guide catalogued, price and checklisted many baseball sets. Additionally, there was a little bio on each set as well as a sample photo of a card from the set. I spent lots of time as a kid reading the guide more like an encyclopedia and learning about each set. While there were a few advertisements from dealers in the book, most of them seemed impersonal and most of the dealers appeared to be located on the other side of the country. Fortunately for me, I soon discovered another publication that helped reduce this problem some.

In a previous blog, I've mentioned a childhood friend of mine who created an iron-on T-Shirt of a 1975 Topps Steve Garvey. He opened my eyes up to the publication Sports Collectors Digest (SCD) and that a publication existed solely for buying and selling baseball cards. It was the second thing I discovered about baseball cards in 1979. To me SCD was an amazing piece of reading material that incredibly came out weekly. I actually still have the first issue I remember reading as a kid from July 1979. Among the interesting articles is one on Fleer taking Topps to Federal Court over their trading card monopoly.

I also found an advertisement interesting for 1975 SSPC cards that shows Steve Garvey. Above the advertisement is another one from Ken Goldin of ShopAtHome and Scoreboard fame.

I've also included a page that had an advertisement for 1979 Topps Baseball Card boxes for $5.00 each.

As interesting as SCD's were to me, I don't know if I purchased more than a couple items (SSPC Dodgers and Yankees old-timers sets) from dealers because building my collection via mail order wasn't too exciting to me. Fortunately, SCD was able to turn me on to an experience that dominated the 1980's collecting world.

I've mentioned that I grew up in the San Fernando Valley which is suburb of Los Angeles. The San Fernando Valley is actually comprised of numerous cities many of which have been made famous by the media. Some of the more well known cities include Burbank, Encino, Calabasas, Woodland Hills, Studio City and Northidge. As a kid, I grew up near Northridge and fortunately for me this turned out to be a major center for collecting as the local Women's Club would rent out their hall once a month to the West Coast Card Club (who happened to advertise their shows in SCD) so that they could put on a card show. People actually meeting at once place to buy and sell trading cards was the third thing I discovered about cards in 1979. I immediately had to go to every show which i did until two things happened 1) the location of the show was moved because they had out grown the Women's Club and 2) I discovered baseball card shops (I'll save that for another post). 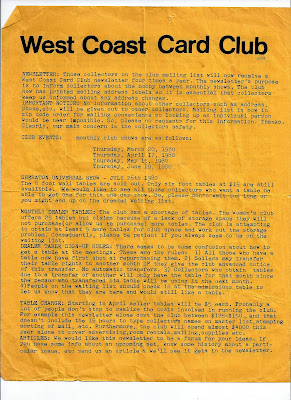 Members of the West Coast Card Club were sent out a newsletter every few months that detailed upcoming shows, provided a collector's spotlight and covered general administrative issues. 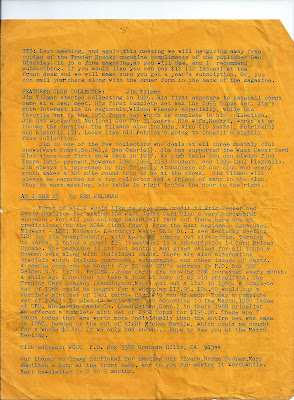 I still remember attending my first West Coast Card Club. The main thing that stuck in my mind was that a dealer named Pepe told me that he'd pay me a dime each for every 1977 Topps Andre Dawson and 1979 Topps Pedro Guerrero Rookie Card that I found and purchased from other dealers common boxes (and in turn sold to him).
Rookie Cards hadn't really taken off yet in the hobby because most collectors were relatively new and tended to gravitate to vintage cards (in particular Mickey Mantle). After three hours of work, I believe I ended up with around $3.00 from all of my hard work. I'm pretty sure my earnings were spent on 1979 Topps packs as this was the first set I ever completed as a kid.
I'd note that a few days after the show, I acquired a 1977 Dawson from one of my friends as well as quite a few 1979 Topps Pedro Guerreros. Below is the Dawson I received in trade. 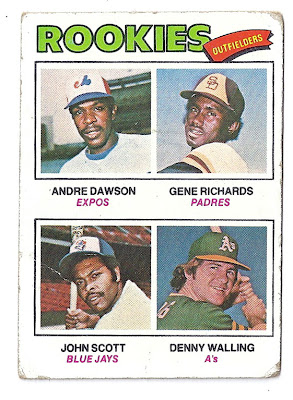 Obviously, condition wasn't an issue to me.
This experience eventually led me to becoming a rookie card prospector/speculator/investor in the 1980's. I can't really say my transition from casual collector to trading card investor paid off in 1980's as I sold my 100 count lots of obscure 1980's rookie cards years ago for pennies on the dollar.

It's probably the reason why I'm once again only a collector and don't worry about the value of my cards.
Posted by steelehere at 7:55 PM

I had the original Beckett price guide (I still have it), but with the other cover. It's supposedly the 'rarer' one:

And anyone who considers that Joe Simpson's rookie card is not of rational mind.