As mentioned previously, I first started collecting baseball cards in 1975. From 1975 to 1978, I'd purchase baseball cards from either the corner liquor store or from the ice cream truck that drove through our neighborhood (My friends and I referred to the driver as Van). Unfortunately, in none of these years was I able to put together a compete set because I was only able to stretch my $1-$2 weekly allowance so far (Packs were 15-25 cents each back then).


With that said, each of the four Garvey base cards below is special to me for it's own reason. One of them in particular is my all-time favorite card. 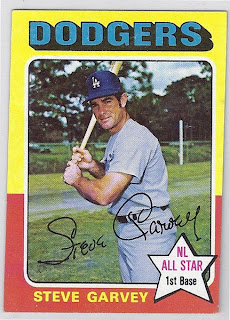 1975 Topps #140 (Front)
I never pulled this card from a pack as a kid but it's still one of my favorites. I think it has to do with the primary colors and the NL All Star on the lower right hand corner.

A friend of mine named Byron took this card to one of those Iron-On Decal Shops that were all the rage in the late 1970's and made a T-Shirt with this card on the center.
Over ten years ago, Byron passed away from cancer much too young. 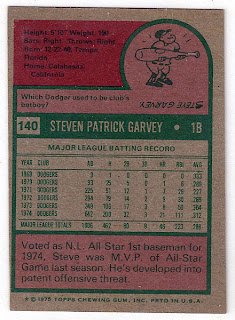 The fact that Steve Garvey was a batboy for the Dodgers got a lot of play through the years. It's mentioned on the cartoon on the back of this card. 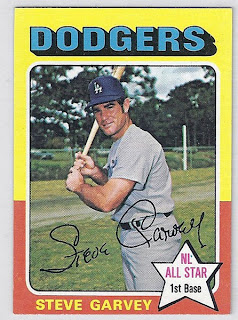 1975 Topps cards are condition sensitive because of their color borders. Many of the Steve Garvey cards had an additional problem of having a print spot on the tip of his nose. 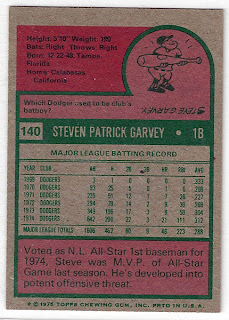 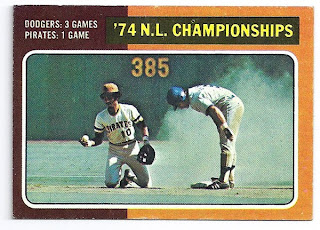 1975 Topps '74 N.L. Championships #460 (Front)
It wasn't until I was older that I considered this a Steve Garvey card because his name wasn't on the front of the card. It looks like Steve just hit a double or stole a base in the picture above. I believe the Pittsburgh Pirate pictured is Frank Tavares. 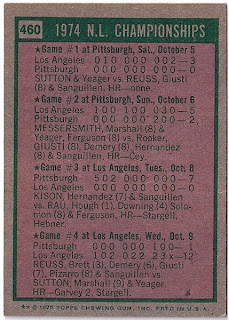 Steve had a great Game 4 (he hit two homers). For years, he was the NLCS' All-Time Career Home Run Leader. 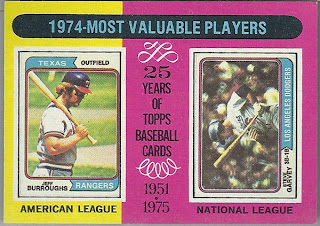 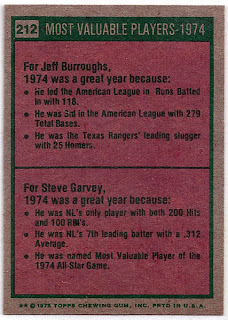 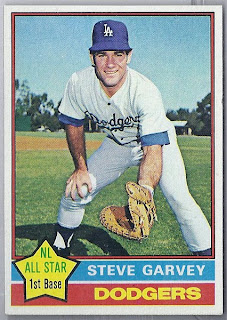 This is the first Steve Garvey card that I owned. I remember how I acquired it as I didn't pull it out of a pack. I was over at a friend's house and I traded him a bunch of cards (to get this one card) that I couldn't tell you today other than a 1976 Topps George Brett and Hank Aaron. While the trade today seems like a complete ripoff back in 1976 it was pretty fair in my mind because I was living in the San Fernando Valley which is the epicenter of the Dodgers L.A. fanbase and getting someone to trade you a Dodgers card much less Garvey was next to impossible.

As a follow up, I'd note that after I made the trade I put the card in my back pocket and by the time I got home the card was completely creased up.

Needless to say, this is my All-Time Favorite card of Steve's. I'm guessing it's probably because of the story above though it helps that the card has all three primary colors in it and utilizes the NL All Star in place of the generic player figures that were pictured on most 1976 Topps Cards. 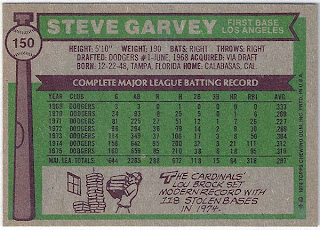 The cartoon on the back of this card about Lou Brock's Stolen Base Record, along with the 1979 Topps All-Time Leader Cards and the copy of the 1976 Baseball Encyclodia that my parents purchased for me help me become fascinated in baseball trivia 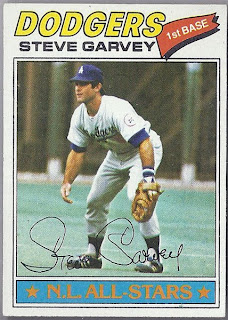 1977 Topps Steve Garvey #400 (Front)
This is the first Steve Garvey card that I ever pulled from a pack. A lot of these cards have print defects on the front of the card where a solid line breaks into the picture on the left side. The photo (along with his 1973 Topps Cards) appears to have been taken at Candlestick Park. 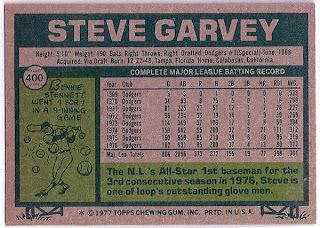 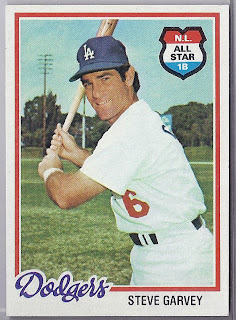 This is the first card of Steve's that he ever autographed for me (I'll include it in a future blog). 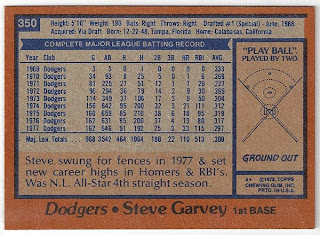 After six years of cartoons on the back of cards, Topps ditched them for some odd game that I never figured out how to play as a kid. 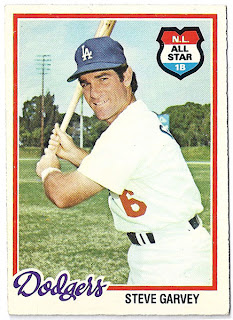 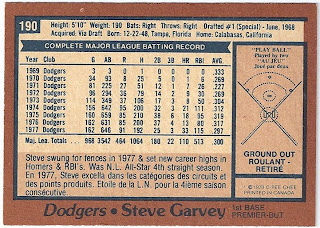