Probably like a lot of kids, I thought that the cards that Kellogg's produced were cool due to the high-tech 3-D graphics (at least for the late 1970's & early 1980's) that Xograph was able to produce for Kellogg's. In my opinion, the initial popularity of Sportflics in the mid 1980's was a result of attracting the customer base Kellogg's had built up.

Below are Steve Garvey's Kellogg's cards that were released intermittedly from 1975-1982. 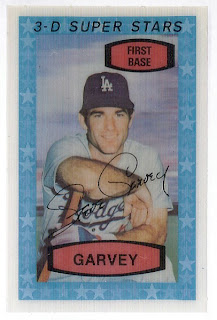 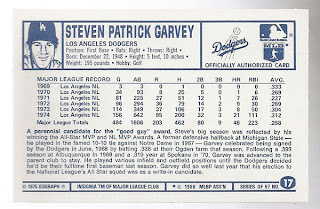 With the exception of 1981, all the Kellogg's cards are smaller in size than their Topps counterparts. Needless to say, that didn't stop them from loading up the back with interesting content. 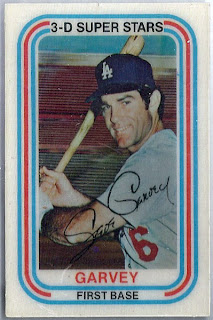 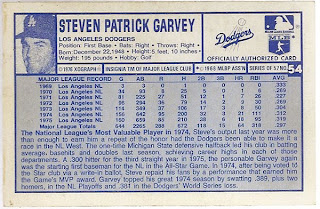 Another well-designed card back. 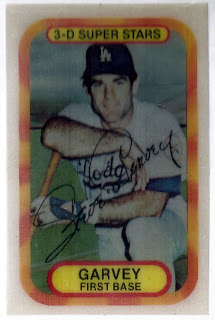 When Steve wasn't practicing his batting stance, Kellogg's tended to photograph him bent on one knee with a baseball bat (i.e. see his 75, 77 and 81 cards) 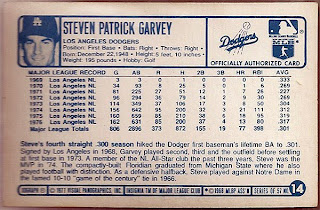 I mentioned previously that Steve's batboy history is well-documented on his trading cards. The same goes for Steve's football career at Michigan State and the fact the he played in the "Game of the Century" in 1966 against Notre Dame. 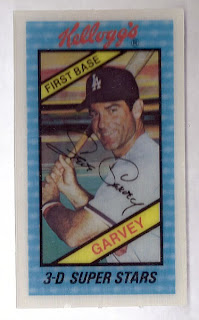 After a two year break so that Kellogg's could produce cards of other deserving Dodgers, (i.e. Ron Cey, Don Sutton, Reggie Smith, Davey Lopes...etc), Kellogg's produced another card of Steve. This one reminds me of 1976 Kellogg's. 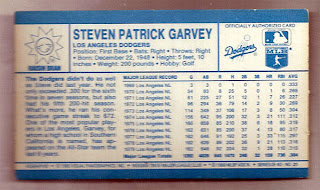 1980 Kellogg's #31 (back)
I remember getting this card as a kid because Raisin Bran was a favorite ceral of mine. I'm not 100% sure but I think that during some years Kellogg's cards were only available in one type of Kellogg's cereals (i.e. Raisin Bran, Frosted Flakes). 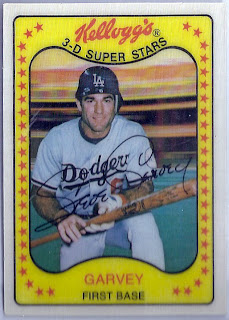 This is the only Kellogg's card that had the same dimensions as Topps Baseball cards. My guess is that Xograph went this route due to Fleer and Donruss entering the card market in 1981. 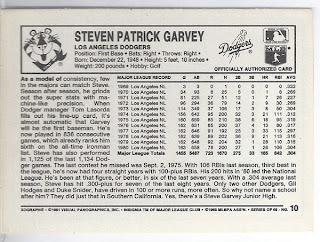 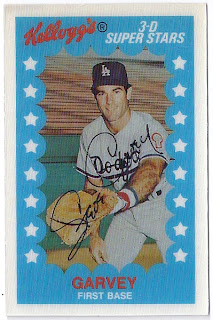 1982 Kellogg's #47 (front)
This was Kellogg's last Steve Garvey card as they didn't produce one for him in 1983 (Fernando Valenzuela and Pedro Guerrero had Dodger cards instead). 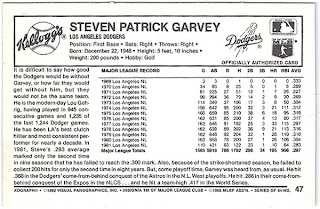