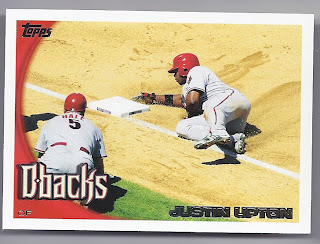 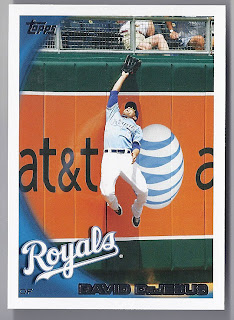 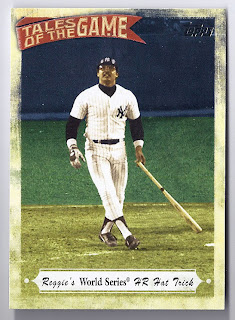 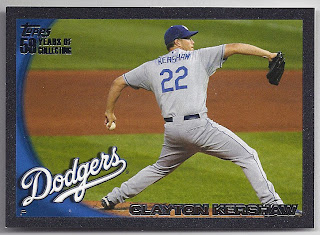 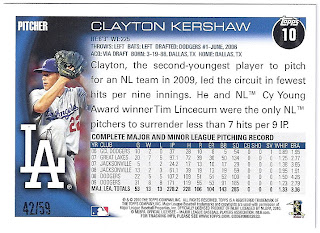 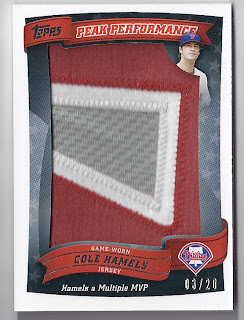 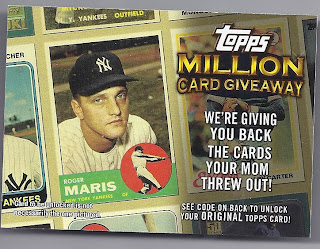 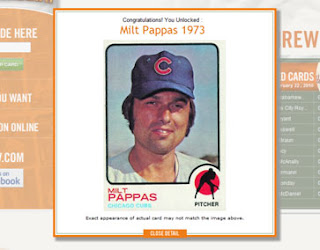 Milt is probably best remembered for throwing a No Hitter for the Cubs against the Padres September 2nd, 1972 that was almost a Perfect Game.
If you've never heard the story, Milt had thrown 8 2/3 perfect innings and had a 3-2 count to the final batter Larry Stahl who was pinch hitting for pitcher Al Servinson. The payoff pitch was arguably a strike but the home plate umpire at the time Bruce Froemming chose to call it a ball. The next batter Garry Jestadt then popped to second baseman Carmen Fanzone.
Posted by steelehere at 6:08 PM 4 comments:

I don't know if the Guinness Book of World Records keeps track of such things but I feel like an interesting book (or blog at the very least) could be written about Topps' Trading Cards quirky facts and unique trivia.
In the previous blog, I mentioned how Topps' didn't put a lot of effort into the photo selection of Bubba Smith's NFL trading cards during his career and as a result they used the same photo five times. Excluding reprints (otherwise the '52 Topps Mantle would win in a landslide), I'm pretty sure this had to be a Topps' record for the most times the same photo has been used on a trading card during a player's playing career.
With that said, this isn't the first time that Topps' repeated something on a player's trading card five times. The player below (who ironically also had only five Topps cards in his career) is featured five times in such a unique way that I believe he also owns a record of his own. Before I show you who he is, I figured I'd show you how I stumbled onto him.
When I was collecting as a kid in the late 1970's, I was a big fan of the Los Angeles Dodgers. Each year, I would try to collect the entire Dodger team set and would use the back of Topps Dodger Team Card as my guide to what I needed. For whatever reason in 1977, I wasn't able to make the connection that there wasn't an individual card of Kevin Pasley (shown below) and that he was actually found on a multi-player rookie catchers card that also featured Dale Murphy. As a result, I assumed that my team set was incomplete. 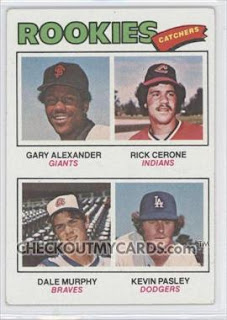 1977 Topps Rookie Catchers (featuring Kevin Pasley & company)
When 1978 Topps released, one of the first cards I pulled was the Rookie Catchers card (shown below) that featured Kevin Pasley again but this time as a Seattle Mariner. Once I got beyond the fact that why is a Dodger that I've never heard of now a Mariner, I asked myself, "Why was Kevin once again featured on a Rookie Catcher multi-player card?" and "How was this possible?" since Kevin was a rookie in my mind in 1977 because he was featured on a multi-player Topps rookie card. 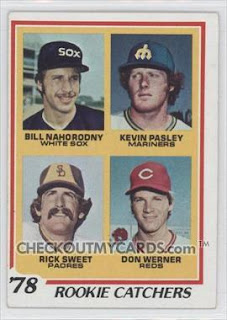 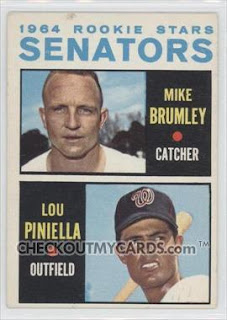 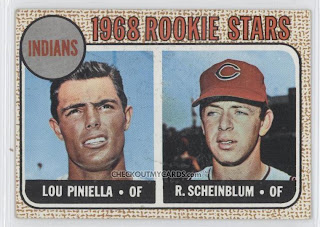 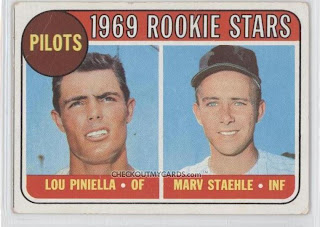 1969 Topps Pilots Rookie Stars (featuring Lou Piniella & company)
I'm not an expert on 1960's baseball because I don't have any firsthand memories and for most of the decade I wasn't even alive but from what I've learned the Cleveland Indians weren't exactly one of the better teams during that era. Outside of Sam McDowell, Rocky Colavito and Leon Wagner, I don't know if I can think of anyone that played during the 1960's that I associate with the Indians.
With that said, the Cleveland Indians did have a pretty impressive first base prospect in Bill Davis. Bill, a 6'7" slugger that the Indians signed out of the University of Minnesota in 1964, proceeded to have a monster AAA season in 1965 (33 HR, 106 RBI, .311 AVG along with a sabremetric pleasing 74 BB's and only 94 K's in 592 AB's). Topps thought enough of him to include him on a 1965 Indians Rookie Stars card. 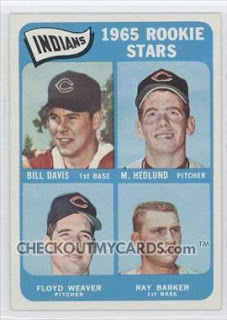 1965 Topps Indians Rookie Stars (featuring Bill Davis & company)
If someone asked you the trivia question, "What do Bob Chance, Fred Whitfield and Tony Horton have in common?" What are the chances you'd know that these were the Cleveland Indians starting first baseman from 1964-1968? My guess is that Topps wasn't completely aware either as they once again included Bill Davis on a multi-player rookie stars card in 1966 because they assumed he'd eventually take over the position. 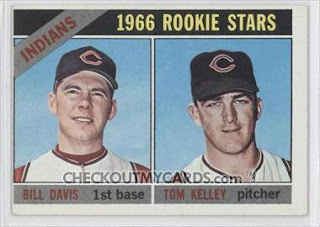 1966 Topps Indians Rookie Stars (featuring Bill Davis & company)
Bill followed up his incredible 1965 season by being shuttled between AAA and the majors. Unfortunately, he was only given 38 at bats to prove himself. This is rather perplexing when you consider how many of today's top prospects are given on the job training in the majors once they give the slightest hint of being major league ready in the minors. 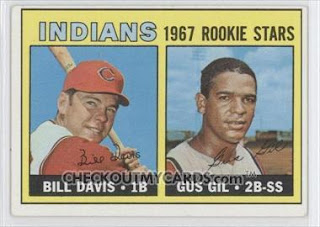 1967 Topps Indians Rookie Stars (featuring Bill Davis & company)
In 1967, Topps went back for a third time and included Bill on a multi-player rookie stars card based on his 17 HR/48 RBI partial season in AAA for the Indians in 1966. Bill hurt himself prior to the start of the 1967 baseball season and ended up spending the entire season on the disabled list. 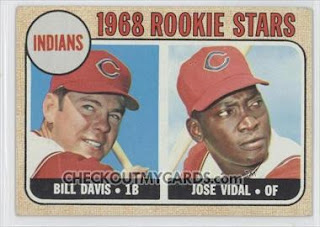 1968 Topps Indians Rookie Stars (featuring Bill Davis & company)
In 1968, Topps again included Bill on a multi-player Rookie Stars card with the hopes that he'd recover for the injury that sidelined him for the entire 1967 season. Unfortunately, a 12 HR / 66 RBI season wasn't what the Indians were hoping for and they traded him to the expansion San Diego Padres for a player to be named that eventually became former 1965 MVP Zolio Versalles. 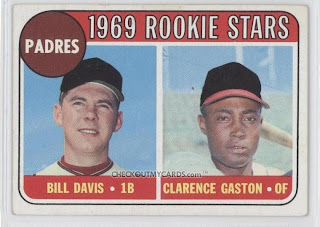 1969 Topps Padres Rookie Stars (featuring Bill Davis & company)
A fresh start on an expansion team would seam like the ideal situation for Bill to finally establish himself as a major leaguer. Even though the San Diego Padres had an ugly 52-110 record, they were the possessors of two quality first base prospects. Once again, things didn't go Bill's way as he ended up backing up the first star of the Padres, Nate Colbert, when he wasn't manning first base in AAA.
Topps went back one last time and included Bill on his fifth and final multi-player rookie stars card (which was also his final card of his career) with future Toronto Blue Jays manager Cito Gaston.
I'd finally note that much like Topps' efforts with Bubba Smith, they didn't make much of an effort with photo selection. As you can see, the 1966 and 1969 images are the same and the 1967 and 1968 images are the same.
Posted by steelehere at 2:04 AM 2 comments: 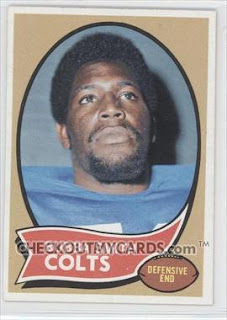 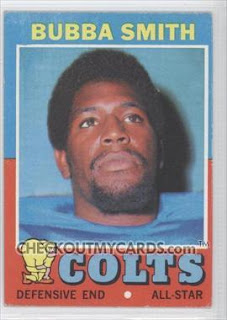 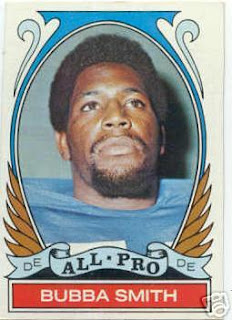 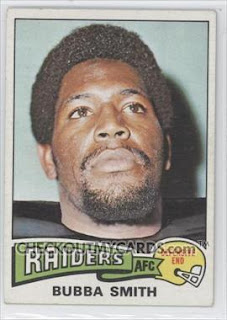 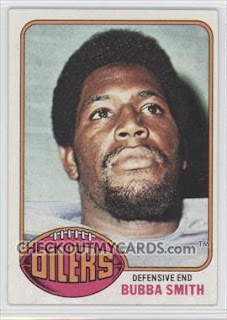 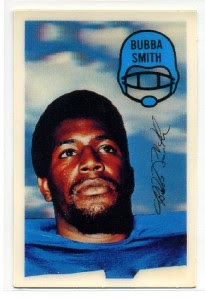 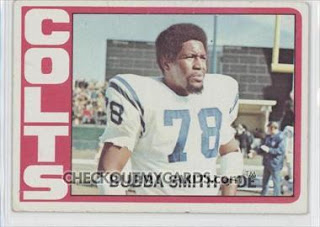 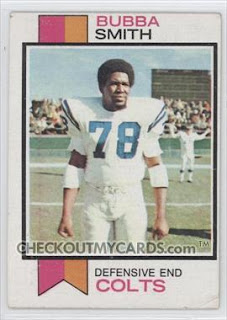 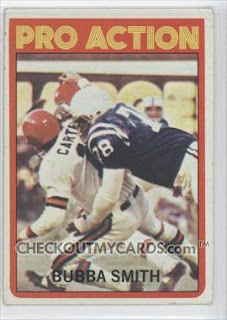