Garvey or Not Garvey?

In building up my Steve Garvey baseball card collection through the years, I've accumulated quite a few cards of his. If I ever create a master list of every card I have of his, I'll have to include a Roger Maris type of asterisk (i.e. 61*) on the ones listed below because each of them for one reason or another isn't actually a licensed Steve Garvey card. With that said, I'm actually interested in acquiring more of these type of cards because of their uniqueness. 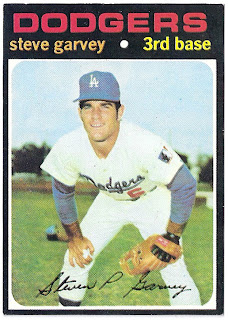 One of the advantages of today's hobby is that the valuable cards produced in new packs are much more difficult to reproduce because of the crash numbering, fancier printing technology and inclusion of game-used relics and signatures on the cards. The same can't be said for the desirable cards from yesteryear.

Case in point is Steve Garvey's 1971 Topps cards which was first counterfeited over twenty years ago. While it's not easy to see, the photo quality of the 1971 Topps card above isn't as clear as the actual card and the card stock is slightly thinner. 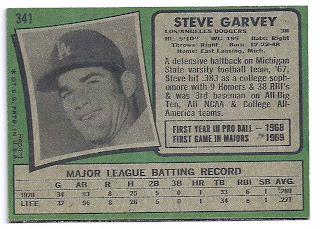 While collecting in the 1980's, I remember that counterfeiting of trading cards reached a point where 1) one of the publishing companies produced a guide on how to spot certain trading card counterfeits and 2) law enforcement ended up getting involved to curtail the problem.

For some unknown reason instead of actually destroying the counterfeited cards, someone (i.e. law enforcement?) actually just stamped "REPRINT" on the cards. You can see this on the back of Steve's 1971 Topps card above. Besides Steve's 1971 Topps cards, I remember that in the 1980's counterfeits were produced for Pete Rose's 1963 Topps Rookie Card and Tom Seaver's 1967 Topps Rookie Card and "REPRINT" stamps were added to the card so that they could be re-introduced into circulation. Note: I'm sure this happened to other cards but I don't have examples offhand. 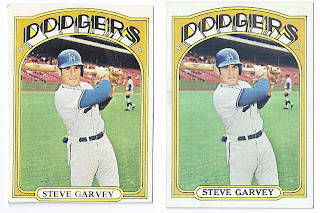 Above are the fronts of a poorly trimmed 1972 Topps Reprint and a regular version. You'll notice the difference in the two when the backs are compared. 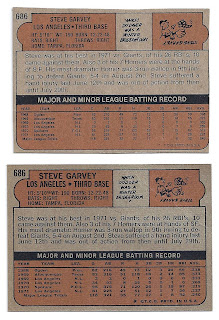 I acquired the reprint version of this card already trimmed so I don't know if the word "reprint" was ever found on this card. The fonts on the back of the counterfeit and regular versions are very different. 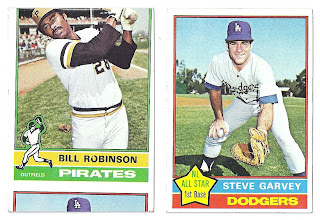 On a more positive note, miscuts and diamond cuts were commonly found on 1970's and 1980's baseball cards. In almost all cases, I usually ended up disposing of these cards because of they didn't conform with the rest of the cards in my collection.

Thirty plus years later, the world now has taught us to appreciate individuality and as a result I've learned to like Topps' mistakes. 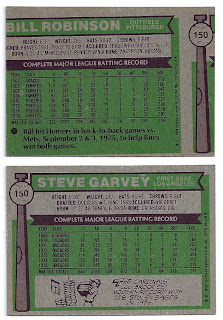 In case it wasn't apparant that Steve's cap was underneath Bill Robinson on the front of the card, Topps made it easy for collectors by including Steve's #150 on the back of the card.

I don't have these listed on my want list found on this site but if you have any Counterfeits/Reprints or Manufacturer Mistakes (i.e. Miscuts/Diamond Cuts) of Steve's that you'd like to trade, I'd be interested in making an offer.

Posted by steelehere at 3:56 PM