I received a package from Night Owl recently and it must have given me good luck because after a week of heavy rains in Southern California, we suddenly had three sunny days. With that said, thanks for the cards as I was able to knock a few more Garvey's off of my wantlist. Below is a recap of what I received. 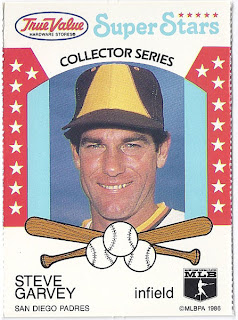 This was a premium set produced for True Value Hardware by Michael Schechter Associates (MSA). MSA used this photo in quite a few sets during the mid-1980's (i.e. Kraft, M&M's, Burger King, Meadow Gold, General Mills) 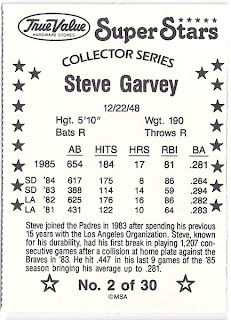 If someone one hasn't written one yet, I think an interesting blog could be written about MSA. I myself don't know much about the company itself but they definitely produced a slew of MLBPA only licensed sets from the mid-1970's to early 1990's. 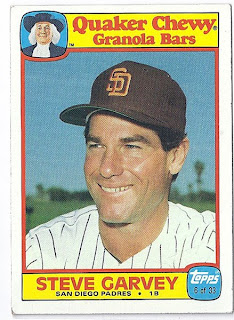 I also received one of these from gcrl recently. When it comes to Garvey cards, doubles are a good thing. 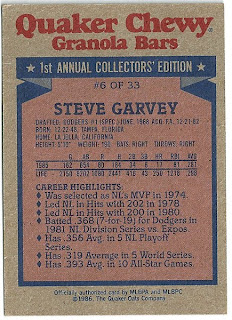 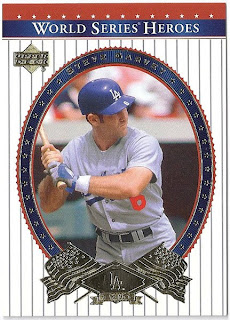 Nicely designed card produced by Upper Deck early last decade. My guess is that the photo was from around 1975. 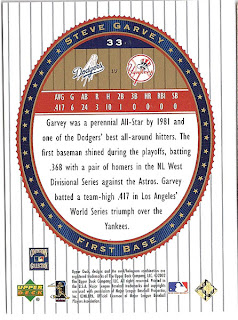 Between licensors and Upper Deck itself, it's interesting to see that Upper Deck has five different logos on the back of the card. I'd have liked to see Upper Deck show statistics from each of Steve's World Series appearances as well as condense the space used for the copy. 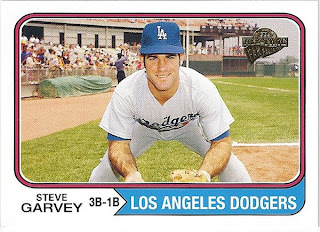 I'm sure I'm not alone with this opinion but this is my favorite design of Topps All-Time Fan Favorites of Steve Garvey. The fact that they used a horizontal picture with the 1974 design along with taking a photo from Shea Stadium (which Topps' commonly did in the 1970's) are why I like this card. 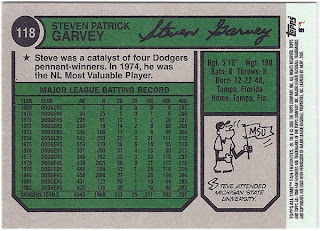 Interesting to see that they included Steve's stats up to his last year in Los Angeles on the back of this card. 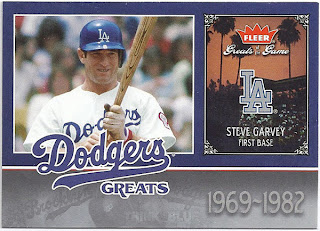 This is an insert card from Fleer Greats of the Game. The card front has a documentary feel to it. I feel like this could be a screen shot from one of those ESPN Sports Century shows about Steve's career. 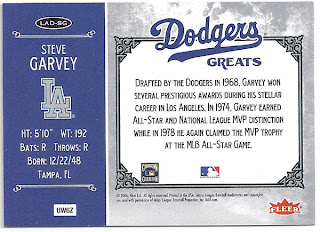 2006 Fleer Greats of the Game Dodgers Greats #LAD-SG (back)

The back is pretty basic. 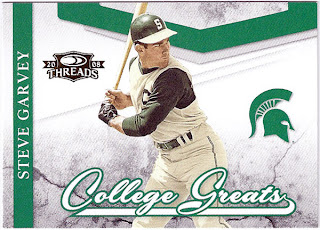 This is an interesting card from Donruss. In order to get around not having a MLB license, Donruss produced cards of players in High School, College and/or logo-less MLB uniforms. As a result, Donruss went the College Route with Steve which is a welcome change as prior to 2008 there hadn't been a lot of Michigan State cards of Steve outside of the 1990-91 Michigan State Collegiate Collection set. 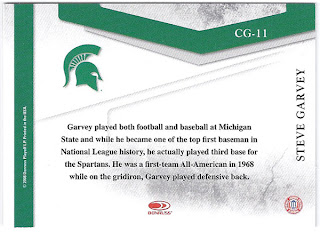 The back is a bit of a disappointment though the information about being an All-American in football in 1968 was news to me. I'd have liked to see Steve's statistics for both baseball and football while in college.

It's a thrill to find some Garvey cards that a Garvey collector didn't have. Glad you enjoyed.