I recently purchased a 1971 Los Angeles Dodgers Dell Today's Stamp album and liked it so much I thought I'd post it online. I was only two years old when these were released so specifics such as how these were distributed aren't familar to me. If you happened to know how and where these were made available or have any stories of collecting these back in 1971, I'd love to hear about them. 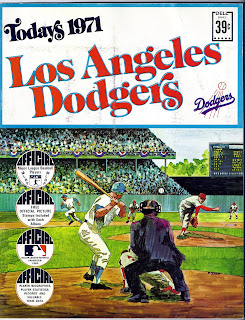 What's Shown: Each album costs 39 cents. The album comes with free picture stamps and includes player biographies, statistics and records. These are officially licensed by Major League Baseball and MLB Players. The artwork on the cover shows a nondescript batting sequence in an unidentifiable stadium. 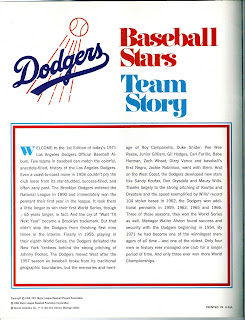 What's Shown: An introduction by Today's to Collectors as well as a recap of the Dodgers History.

My Thoughts: Considering that President Nixon hadn't made his historic visit to China yet, it's nice to see that it was still a concern to note that this album was printed in the good old USA. 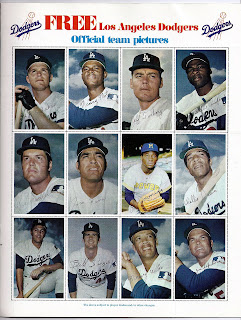 My Thoughts: Al Downing is wearing a Milwaukee Brewers uniform. I guess Topps' had a monopoly on all the airbrushers. Every other player had their picture taken with the sky as a backdrop. Was the disclaimer necessary?" 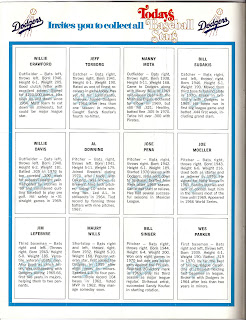 What's Shown: Valuable Data and Biographical information for the twelve players on the previous page.

My Thoughts: Taken as a whole, the front and backs of the stamps remind me of 1951 Bowman Baseball. Where's the mention of the Brady Bunch and Greg Brady on the back of Wes Parker's stamp? 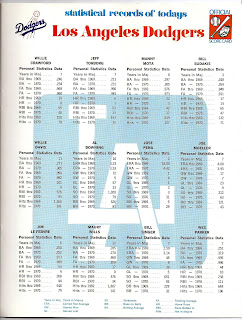 My Thoughts: This is the first time I've seen a trading card, sticker or stamp be allocated two card backs for just one card front. The footnotes include unique abbreviations for Games Won, Games Lost and Strikeouts.

Coolness Factor (Ranking from 1-10): 4 - I'm taking off two points (when compared to page 4's six points) for the use of a second card back. 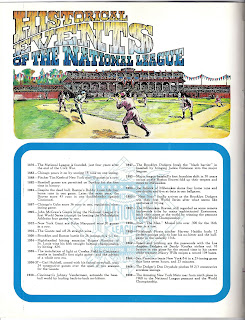 What's Shown: Historical Events of the National League and a painting of what appears to be a turn of the 19th century baseball game.

My Thoughts: When this was printed in 1971, Jackie Robinson's breaking of the "Color Barrier" was reference as the "Black Barrier". It's interesting to see that some "Sophisticated Easterners" viewed the Milwaukee Braves as a "Backwoods Tribe" in 1957. 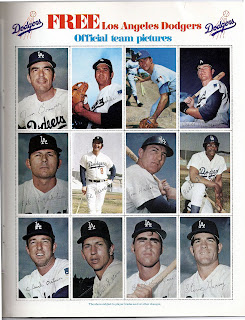 My Thoughts: Hey, it's a Steve Garvey Rookie. Boy do Bill Russell and Bill Buckner look young. It's also nice to see that three of the players have backgrounds other than the sky. 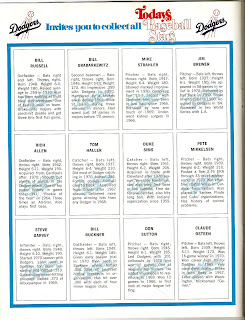 What's Shown: Valuable Data and Biographical Information for the twelve players on the previous page.

My Thoughts: It's interesting to see that Bill Russell was viewed as one of the fastest men on the team. That's saying something when Maury Wills was Bill's teammate. Surprise, Surprise, I didn't know that Claude Osteen was nicknamed "Gomer". 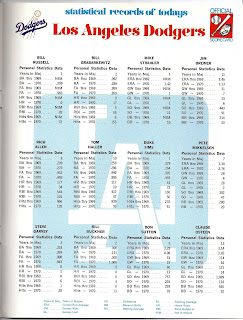 What's Shown: Statisical Records for the players shown on Page 7.

My Thoughts: Pretty much the same as when I looked at page 5. "Is this necessary?" 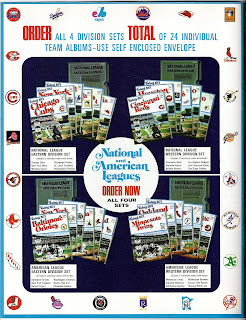 What's Shown: An Advertisement to order all four division sets (24 teams total) with the enclosed envelope found in the middle of the album.

My Thoughts: How much do these cost? Note: The answer is found on the insert. I'm familar with most of the 1970 style logos that wrap around the advertisement with the exception of the White Sox (bottom left), Brewers (middle right), Phillies (top right) and Senators (middle right). 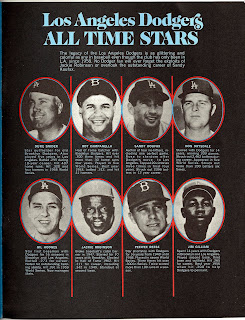 Inside Back Cover (page 11)

My Thoughts: Not to nit pick but Jackie Robinson and Roy Campanella never played for the "Los Angeles Dodgers" and Pee Wee Reese only played for one season. Also, does Jim Gilliam belong on the same page with these other players.? I always thought of him as a Bill Russell or Steve Sax type of player. 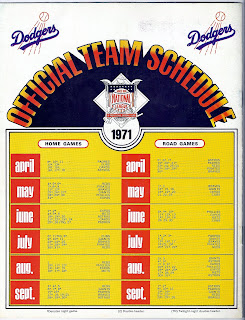 My Thoughts: Wow, there are five doubleheaders on the schedule including three at Dodger Stadium. There is a lot of 1970's style fonts in play between the use of all lower case for the months and 1972 Topps-esque arch of the words "Official Team Schedule".

What's Shown: Pricing information on albums for the other teams as well as a "Free All Time Great Stars" album and a "Handsome Division Set Binder" that you get when you purchase any or all of the four MLB division album sets. Note: This was a four page insert (two pages of front and back photos). I wasn't able to scan the rest without damaging the album so you're going to have to trust me on this.

Posted by steelehere at 3:57 PM

That's a really nice album. These were a bit before my time (I was 5 in 1971), but if they would have come out a few years later I would have convinced my dad to get the NL West album set.

Thanks. If I ever come across a Giants album I'll send it your way.

that's pretty sweet. i have the garvey but that's it. it would be nice to have the whole thing!