Bark in the Park

Recently, I took my wife for the first time this year to a Los Angeles Dodgers game. It was their inaugural Bark in the Park promotion. For those of you that aren't familiar with the event, MLB teams the past few years have been taking a page from Minor League Baseball's promotions department and designated certain games where you could bring your dog with you to the ballpark. 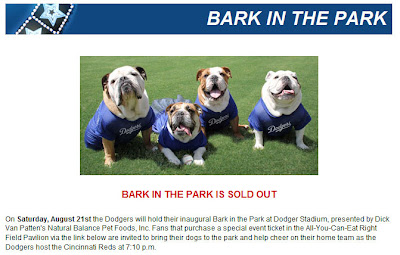 The Dodgers BITP event was very well run and unexpectedly the seats sold out weeks in advance (the event was capped at 500 dogs). In order to attend the game you had to purchase a $25 seat for each person attending as well as a $25 seat for your pooch. All the seats for the event were in the All You Can Eat Pavillion in Right Field. Note: If you haven't been to Dodger Stadium, this section has a reputation for being rowdy partly because the out of control LA Raider fans that used to start fights at the Coliseum seemed to have migrated there. This lead to many of my friends joking in advance that the section was going to be loaded with Pit Bulls. Needless to say, this couldn't have been further from the truth.

Most of the dogs at the event were small or medium sized with the exception of there being a lot of English Bulldogs due to a look-alike contest the Dodgers were running prior to the event. We brought our miniature dachshund named Chloe (she's shown on this blog on the right hand column). In order to get admitted, you had to sign a waiver (I'm guessing in case one of the aforementioned Pit Bulls attempted to eat your dog) and bring a current rabies certificate (another joke was that this should be required for all Dodger fans and not just dogs). 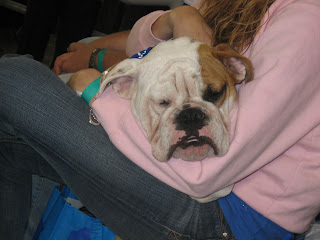 Once admitted, Natural Balance Foods provided a goodie bag for each dog. The Dodgers held a "Pup Rally" by the entrance of the Right Field Pavillion and it featured Tillman the skateboarding English Bulldog (he's why there were so many bullies at the game) as well as Dodger Legend, Steve Garvey. Unfortunately, Steve was swarmed by fans so I missed out on a photo opportunity during the Pup Rally. After the Pup Rally, all the dogs and their owners got to take a lap around Dodger Stadium along the warning track. Seeing 500 dogs walk arould the field with their owners and have the occasional "accident" was quite the scene. From a fan standpoint, I saw the Dodgers starting pitcher Chad Billingsley sitting in the bullpen rest area, Andre Ethier doing windsprints, Ronald Bellisario sitting by himself in thought in the Dodger Dugout and Chris Speier in the Reds Dugout checking all the dogs. 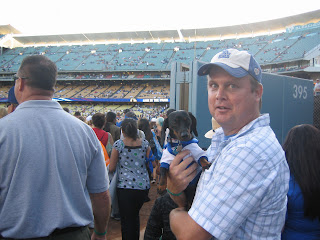 Having not sat in Pavillion seats at Dodger Stadium in years, I'd have to say I went through a bit of a learning curve figuring out what to do next. Among my challenges:
After I figured out and we took care of #'s 1-4, we got back into our seats just in time to watch Nicolette Sheridan of Desperate Housewives fame throw out the first pitch. 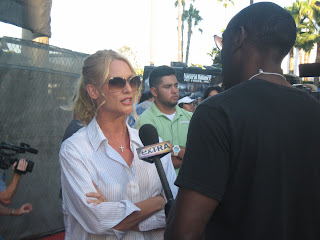 My wife has been to quite a few Dodger games over the years with me and she concluded that this was one of the best games she's ever attended because she spent most of the game looking at the dogs.

Chloe enjoyed the game as well. She wore here Dodger jersey and collar, had lots of treats, didn't have any accidents and fell asleep in my wife's arms halfway through the game. 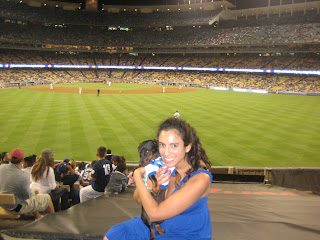 As for myself, I got to see a great game. Coincidentally, it turned out to be Manny Ramirez's last LA Dodger home game. The Dodgers won a slugfest against the Reds and it was highlighted by four Dodger home runs including two hit not far from where we were sitting. 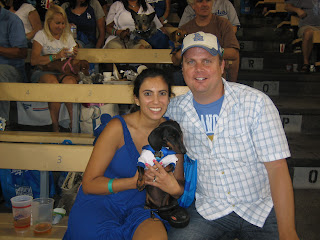 Finally, I'd note that during the walk around the warning track, my wife took this picture of Chloe, myself and Steve Garvey. 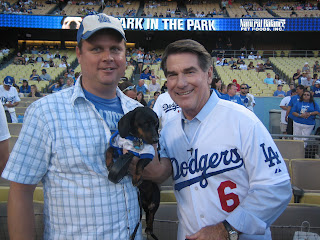 Chloe was super-thrilled to meet him.
Posted by steelehere at 10:49 PM

It looks like you had a great time. It seems like it was pretty successful for the Dodgers. I hope they do it again next year, I will participate for sure.

Great pics. Chloe is a cutie!