One of the coolest features that I've seen on blogs is "Cards That Should Have Been". Being a player collector, it's great to see Steve Garvey in mocked up Topps trading cards from 1969 to 1988. This is especially true if he didn't have a card in a particular set/subset in the first place (though Topps I wish you'd make another All-Time Fan Favorites set). The author of one of the blogs that I read regularly, GCRL, is particularly adept at creating these.

One of my favorites is his CTSHB of the 1977 Dodgers 30 Home Run foursome on a 1978 Topps Record Breaker Card. 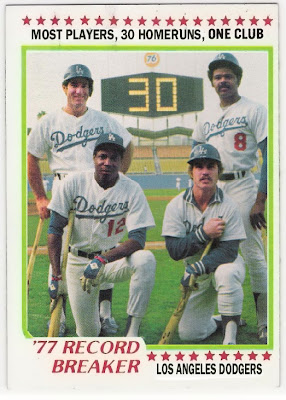 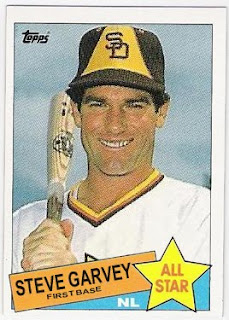 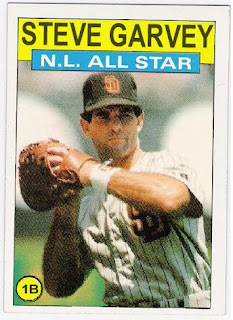 In my opinion the two coolest concepts in CTSHB are cards that pre-date a player's actual rookie card (assuming the player did actually play in a year prior) and final tribute cards so that you can see the players final stats.

In the case of Steve Garvey, he played for the Dodgers in 1969 and 1970 prior to his 1971 Topps rookie card being issued. He played his final game in 1987 and never had a final tribute card in 1988 from Topps (newbie Score eased that pain somewhat).

The Internet has helped me fill in those holes and led me to start a virtual collection of Steve Garvey cards. Here are the mockups cards of Steve that I've found so far that use 1969, 1970 and 1988 Topps designs.

The first one I found has a 1969 design and was created by Bob Lemke. 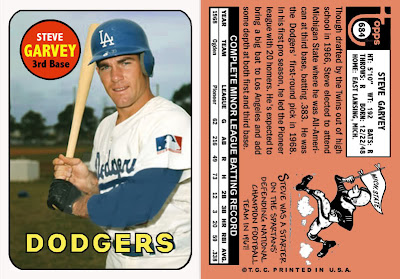 The second one I found has a 1970 Topps design and was created by Mr. Mopar. 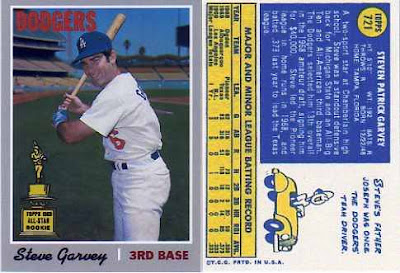 The third one I found also has a 1970 design. Unfortunately, I don't remember who designed it (I believe I sourced it from a PSA message board). If anyone recognizes this, leave me a message with a link and I'll update this post. 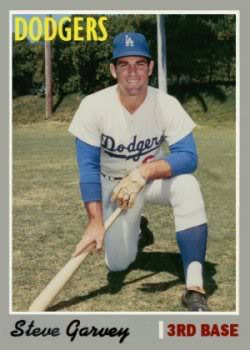 The fourth one I found has a 1988 Topps design and was created by Punk Rock Paint. Unfortunately, a back to the card was never created so you don't get to see Steve's complete career stats. 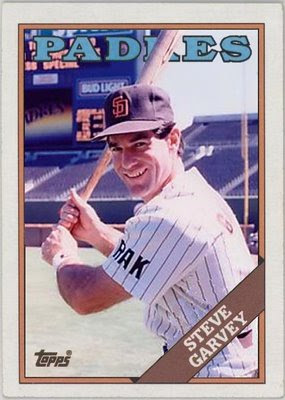 With that said, I'm assuming this can't be it so I was wondering if I could get your help. Are any of you familiar with any other Cards That Should Have Been for Steve Garvey from his playing career? Also, does anyone know if Baseball Cards Magazine (or any of their competitors) back in the 1980's ever produced a mockup Steve Garvey card using a Topps, Fleer or Donruss design?

Thanks in advance
Posted by steelehere at 9:23 PM

i'm working on a back for the 88 garv - should be up in a week or so. i also have a 70 topps of my own that i'll post soon.
i really enjoy making these things, and seeing what others have done, so i'm glad you like 'em too.

Looking forward to both.

the 88 garv back is posted, along with a ron cey 88 topps

I think Bob Lemke also had another Garvey, maybe the 1955 Topps FB design. There were no "fake" cards of Garvey made that I am aware of that actually made it into cardboard form. I have seen or own nearly all of the Krause and other CTNW "Cards that never were" issues that were magazine inserts. They came too far after Garvey was popular.