Fleer as you're probably aware sued Topps in Federal Court to break their monopoly on producing baseball cards. As a result of the decision, they started producing baseball cards in 1981 (along with Donruss). Ironically, almost 30 years later, Baseball Cards have run full circle and we're back to just one fully licensed MLB manufacturer.

Below are images of all of Steve Garvey's cards from Fleer's base sets released during 1981-1987. 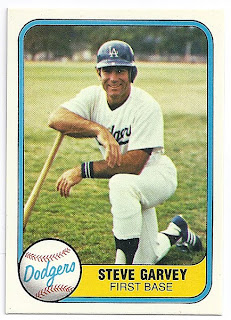 I'm a big fan of this card. I like the pose and the colors of the card.


For this being their first baseball card set featuring individual active players since 1963, Fleer did a decent job though they did have a few noticable flaws. Below are the Pros and Cons of the set (as I see them).

- Single Player Card of the most popular Rookie in 1981; Fernando Valenzuela

- Too Many Errors Cards (which were probably produced intentionally)

- Card Stock wasn't the best (the backs tended to chip) 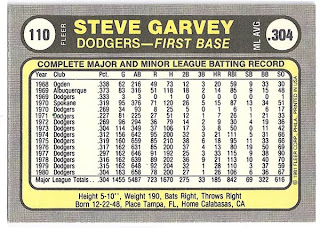 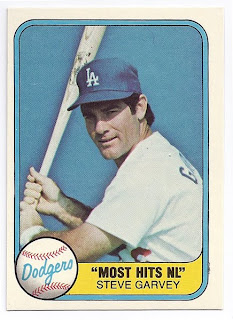 I wasn't a big fan of this card, I think it's because it looks like Steve doesn't have any pigment in his face. Additionally, even though the background is Dodger Blue, it's actually pretty boring. I used to wonder if he was standing in front of a blue screen like they use in Hollywood and that Fleer meant to super-impose a background picture. 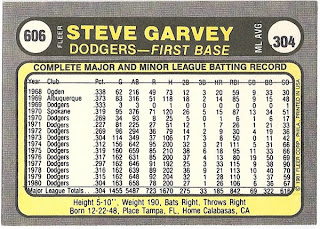 Fleer probably should have had a different back for this card as it's exactly the same as his other card in the set. 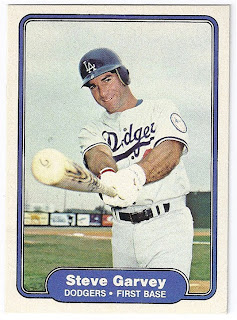 I like Fleer's choice of image for this card as well. The same can't be said for much of this set as a lot of the images tended to be out of focus. 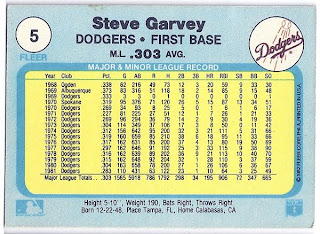 Fleer's backs were a slight improvement for 1981 with the addition of color. 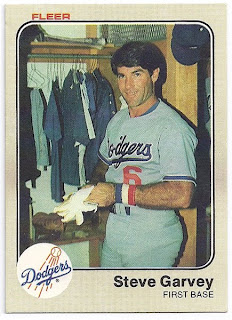 1983 is an underrated set in my opinion. I like Fleer's decision to show Steve's locker though I'm surprised that a first rate organization like the Dodgers didn't afford the players wooden or at the very least plastic hangers. 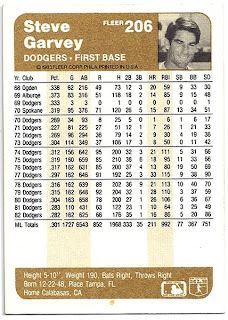 Adding an image and making the backs vertical were major pluses. 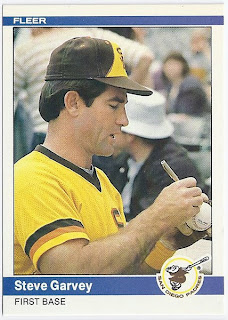 1984 is arguably Fleer's best set ever. Unfortunately, it was overshadowed by Donruss' landmark 1984 base set. To this day, Steve is one of the most accessible autograph signers. What's most impressive is the quality of his signature. 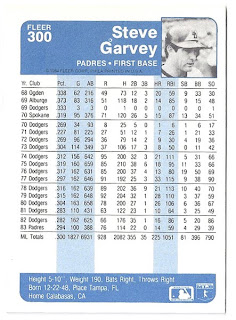 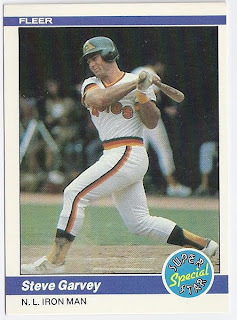 Fleer made this card in honor of Steve's National League consecutive game streak ending due to a broken thumb. I've always wondered if Cal Ripken started his streak partially because he was a fan of Steve's because his started right around when Steve's ended. 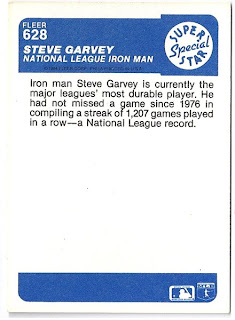 Fleer left a lot a space on this card and often did this with their card backs (just the facts). 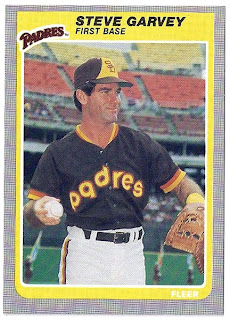 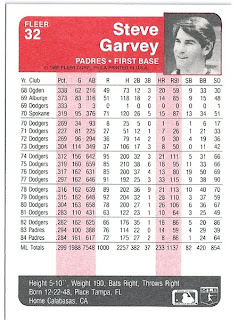 You know Fleer came up with a good thing in 1983 when they're using the same design on their card backs two sets later. 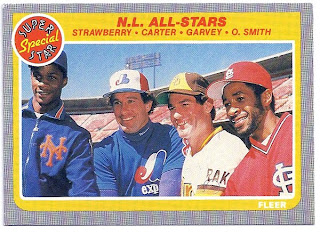 Fleer was paying homage to the Topps sets from the late 1950's and 1960's when they came up with these multi-player concepts. 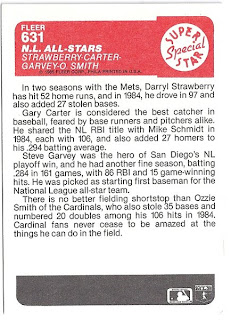 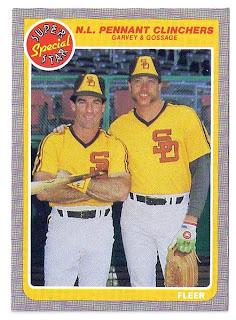 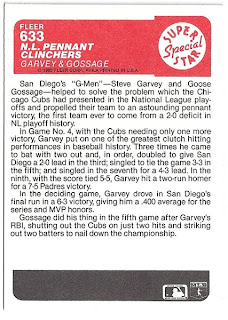 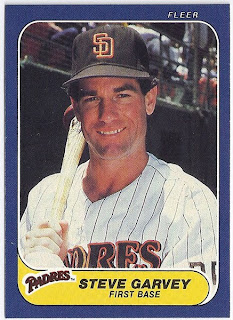 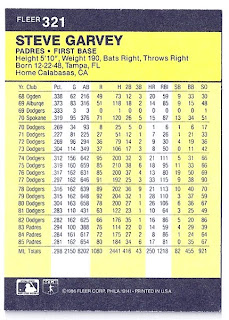 For whatever reason, Fleer ditched the image on the back. 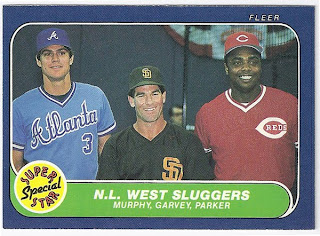 Steve looks really short next to the Murph and the Cobra 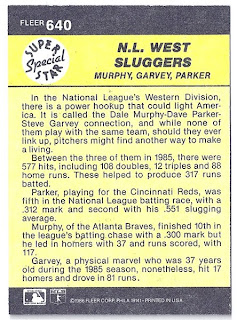 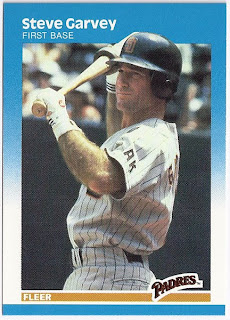 
An interesting thing in this photo is the donut on the bat. It's something that you don't see anymore in baseball as it's been replaced by weighted bats and a weighted cylinder. 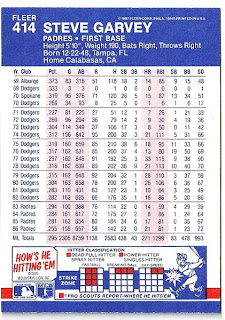 I always liked the inclusion of the hitting chart on the backs of 1987 Fleer cards.
Posted by steelehere at 9:32 PM

What makes you say the '81 error cards were probably produced intentionally?

Night Owl first off, I wanted to say that I'm a big fan and regular reader of your two blogs.

As for your question, Collectors went crazy for Error Cards back in 1981. I think it's partially because Topps corrected so few errors in the decade prior (all I can think of from the 1970's is Bump Wills from 1979 Topps and the Washington Nationals/San Diego Padres cards and assorted error cards from 1974 Topps).

The other reason I believe is that prices for the error cards were expensive for their time with respect to all other cards in their set (i.e. the "Craig" Nettles cards used to sell for $30.00, the various star cards that had the same number as another card in the set [i.e. Steve Carlton, George Foster, George Brett, Pete Rose] used to sell for $5.00 per yet at the same time the Fernando Valenzuela Rookie Card sold for a couple dollars}.

WIth that said, I don't think all of the errors were intentional but the volume of errors produced and subsequently corrected by Fleer and Donruss was excessive especially when you consider that both companies had produced numerous sets for years prior to 1981 in other categories (i.e. Football Action Sets, Retired Players, Kiss, Elvis) and they weren't inudated with errors.


In 1981, Fleer and Donruss were the new kids on the block (for baseball) and were trying to do whatever they could to gain market share. Once they saw how collectors were reacting to the errors they initially corrected, they proceded to find additional errors to correct as well as "accidentially" produce more error cards (i.e. the Ron Cey "Finger on the back error" wasn't discovered and corrected initially in 1981").